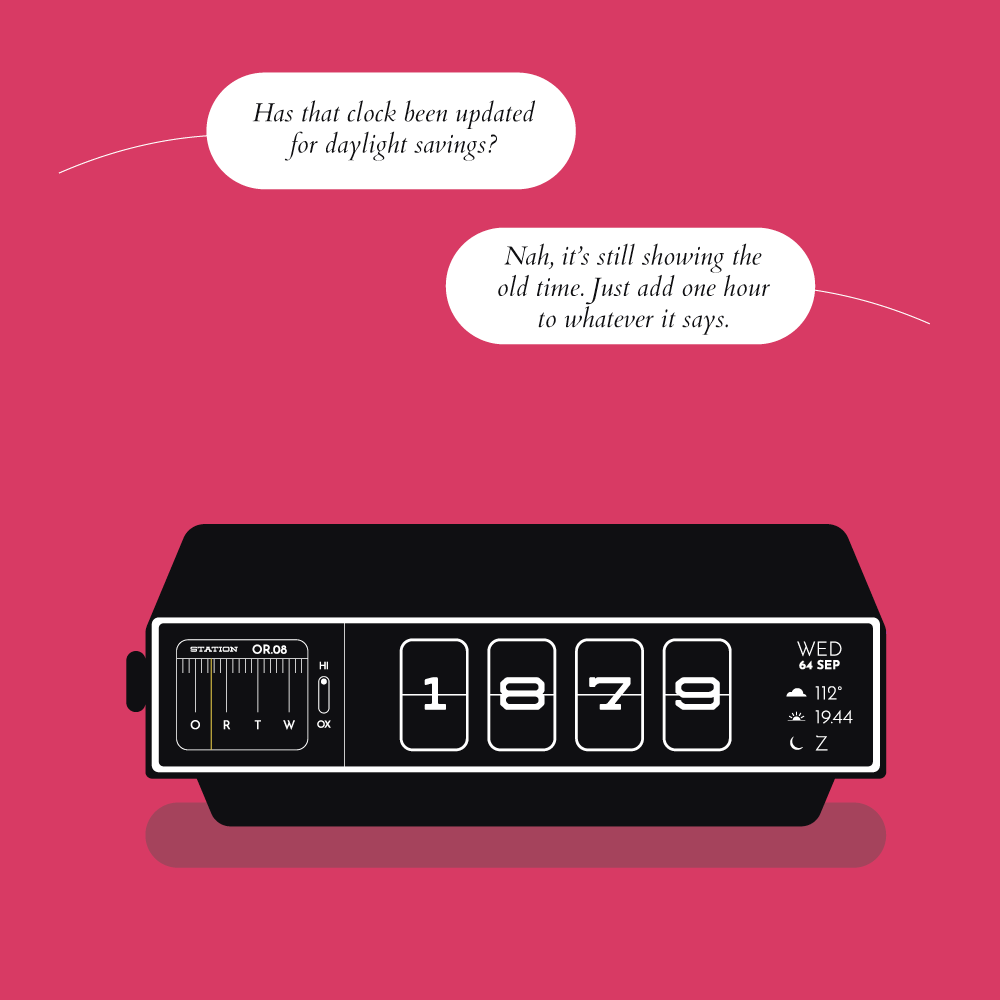 WE'RE OPEN TILL 10 PM TODAY, BUT DURING DAYLIGHT SAVINGS TIME, WE SHUT THE STORE DOWN AND RETREAT TO A CABIN IN THE WOODS.

My location is currently Jakarta, Indonesia.

Jakarta is roughly -6°in latitude. This means that Jakarta is about 414 miles away from the Equator1 (about 666 km) and that also means Jakarta lies in the southern hemisphere.

Jakarta is also on the northern coast of Java island2, which is the most populous island in the world with… well I don’t know the exact number but it’s millions and millions of people. Indonesia has a lot of islands — as I’ve mentioned before; the number is somewhere in the region of 17,000 — but there are five “main” ones: Java, Sumatra, Sulawesi, Borneo and New Guinea. Although Borneo and New Guinea aren’t owned entirely by Indonesia. On Borneo, for example, there’s a lot of Malaysian territory as well as a small nation called Brunei. And only around half of New Guinea belongs to Indonesia, the other half is a separate country called Papua New Guinea. Yes, it’s that one with the bird on its flag.

Jakarta is also the capital city of Indonesia (for now3) and is in the western part of the country, which means it lies in the Western Indonesian time zone. The nation of Indonesia has a total of three time zones — probably due to the country being so massive, I mean end-to-end it’s over 3,000 miles (5,200 km).

But that’s not always true for all big countries. China is also a massive country, spanning around 2,300 miles across (around 4,100 km) but only has one time zone. I don’t know, the Chinese government just wants it that way.

But time can get even more complicated in other places.

What is daylight savings? Let me explain. In some countries, during the summer time, everyone turns their clocks forward by one hour. So instead of the sun coming up at 5am, for example, it would actually be coming up at 6am, according to the new time. Then sunset would also be an hour later, instead of 6pm it would be 7pm for example. Are you confused? Welcome to daylight savings.

You see, the whole idea behind daylight savings was that everyone would get more time in the sun during summer. But all it does really in the 21st century, where people mostly spend their leisure time scrolling the front page of Netflix, is just cause extra confusion4 when you want to schedule a multinational conference call. You would probably need multiple clocks on the wall showing various different time zones like in the lobby of some stock market exchange.

2 The coding language Java gets its name from this island.

3 I think I’ve mentioned this before, but the Indonesian government has decided to change the capital of the nation to a new city; a city that although hasn’t been built yet, will be known as Nusantara.

4 This is just my opinion. Some people might think that daylight savings is a good idea, even today. Like in the United States, where they have four main time zones (Pacific, Mountain, Central and Eastern) in the continental part of the country (so not including Alaska and Hawaii — they have their own time zones), they have daylight savings in every state so they times go back and forth by one hour depending on the time of year. Every state except two, that is. Hawaii and Arizona (although Arizona is a bit mixed — some parts of the state follow daylight savings while others don’t). Wow, I think I need to go lie down after all that.

WHY IS OCTOBER THE TENTH MONTH WHEN “OCTO” ACTUALLY MEANS EIGHT?

These are the things that keep me up at night.