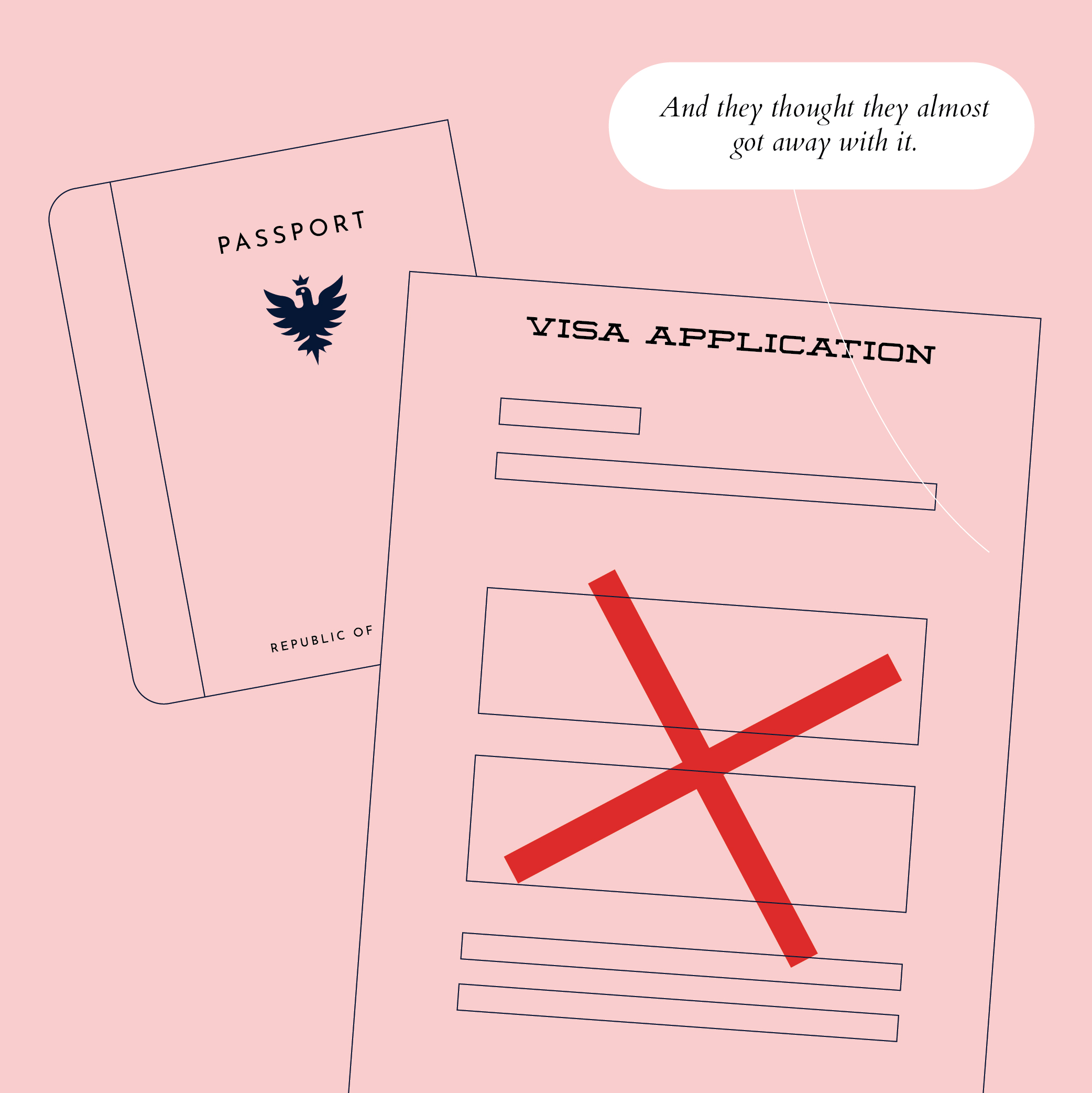 You guys go on ahead, these lines at passport control always take a while.

People in movies, especially secret agents and people pulling elaborate heists, are always travelling around the world going from place to place in order to achieve their objectives. Like first they’re in Los Angeles, the next minute they’re in some opera house in Vienna, then some tea house in Morocco, before heading off to the Amazon rainforest for the final act of the movie. But my question is: do they get visas for every single place they go to? How do they just get in to any country they please? I know, having a realistic movie where the characters are actually standing in line at immigration waiting for the “business or pleasure?” question and getting a stamp with an expiration date on it in their passports wouldn’t make for a very exciting movie. But for me, as an over-thinker, find it hard to concentrate on the movie with stuff like this going on. I mean, in some cases, for example with James Bond, I kind of get it because he’s working for the British government so he probably gets some sort of high-priority-diplomat-type visa where he’s allowed to travel basically anywhere. But for the group of ensemble misfits planning a heist to steal some jewels belonging to some Russian oligarch, what exactly do they write on their visa application? “Jewel heist”?

I’ll be right there, I just need to find the stopper to this bottle first. I knew I shouldn't have thrown it off the edge of that waterfall.

The warrior puts his sword back in its sheath and whips out out a pouch made of leather. He bites the cork stopper with his teeth and pulls, spitting the stopper away. My question is: when he’s done drinking, does he then go and fetch the stopper so he can put the pouch away?

I think she wants us to stop fighting and retreat? I see her mouth moving but she’s way over there at the top of that hill so I really don’t know.

Whenever I see a scene in a movie or a show — especially some sort of battle scene set in ancient times — and there are hundreds of people gathered around a central leader who is giving an intense speech to inspire them into battle or something like that, I can never focus. Because all I can think about is: can those people all the way at the back hear what’s going on?

Hey, can you go get us a movie snack whilst the opening credits are playing. What do you mean you actually want to watch them?

This one is a bit outside-the-box, but movie production studio titles are kind of weird, aren’t they? It’s like you have to see the logos of the companies that made the movie before you see the movie. I think it’s strange. But the thing is that we’re so used to it now that it feels weird if  a movie that just started without showing any movie studio logos or anything. Just began at the first scene, out of the blue. That being said, I do like how some movies do just start out of the blue, like Watchmen. The movie blends the studio logos into the first scene in a stylised way that kind of works well.

A villain, royalty or leader of some kind clicks his/her fingers or nods to order people around. What, did they have a meeting beforehand to discuss what every gesture meant?

Why is that guy wearing a suit running through the train station carrying a big, wrapped-up gift under his arm?

Dad can’t get home for daughter’s birthday. How many times have you seen this? You know what I’m talking about. It always goes something like this: some big shot guy, busy from working so hard at his executive-level job struggles to make it home for his daughter’s birthday to the point where she stays up late and cries, and the mother comes into the daughter’s bedroom already frustrated and disappointed, tells the daughter that the dad won’t be able to make it and then tells her to go to bed. And then by the time the dad gets home, the daughter is already asleep. I mean, it’s a good device to show the dad to be a hard-worker as well as a family man, but how many times do we need to see this? Seriously, how many times?

Hey, look! This car's unlocked. What? I should leave it because it belongs to that main character over there who's going into that house to get something so the plot of the movie can move forward? Sure, makes sense.

People in movies and shows don't seem to bother to lock their cars very often. They just get out, shut the door and walk away. Also, a related one: cars with the keys stored in the visor. I mean, who does that? Do people do that? Would you do that? Keep the key to your car in your car. Or is it a spare key that they keep up there? Either way, it's weird.

He crosses the street in New York City and goes into the coffee shop. He sees the barista and says something like: “Hey, how’s your dad doing?” And the barista will be like, “Yeah, he’s still in the hospital. The surgery went well.” Like they know each other. I mean, my experience of living in a big city is that you barely see the same person twice. Just saying. Also, there never seems to be any traffic in big cities like Boston or London when there’s some sort of car chase scene going on. As someone who has lived in big cities his whole life, trust me when I say that in more or less any big city, traffic is never too far away.

What happened? My car's missing and I got this giant bruise on my forehead.

Home invasion and action movies have this in common: a masked psychopath enters a home and is, well... ruining the family’s night, to say the least. Then all of a sudden, a member of the household who’s been hiding in the closet this whole time comes out and whacks the psycho on the head with a frying pan. And he passes out cold. I mean, seriously? Since when does a pan to the head make a grown man black out? I’ve even seen people in movies and shows passing out after hitting their own heads on walls. Now, I’m not a doctor or anything but I’m quite sure that you would have to hit your head pretty hard to make yourself actually literally black out.

I don’t know why this bothers me, but in movies they take off necklaces just by ripping it off someone’s neck. Like it’s made out of paper or something. Another similar thing is ripping clothes. Sometimes, clothes actually take a bit of effort to rip apart — depending on what material it’s made from, of course — but in movies and stuff they just rip their own sleeve or shirt off like it’s no big deal.

Excuse me ma’am, I’ve been waiting for three hours and I kind of need to go and pick up other passengers now.

He gets out of the taxi and his buddy, who’s still in the taxi, rolls his window down and they just carry on their conversation whilst the taxi driver is just sitting there waiting for them to finish. I mean, no offence to taxi drivers, but I don’t think I’ve ever seen a taxi driver that patient. Nor should they be, to be honest. I mean, can’t you just finish your conversation later? Or earlier when you were on the way? You’re going to see each other tomorrow at the office anyway. But no, go ahead and keep the driver waiting while you wrap up your heart-to-heart that’s just taking forever. I’ve also noticed people in movies and shows doing this with elevators. Somebody exits the elevator, but another character that’s still in the elevator just grabs her hand and gives her some long monologue trying to tell her that he’s sorry — or something like that. I mean, there are other people in this elevator, you know. And they just want to go up to their floor and get on with their lives. Can you please have a little consideration? How about you get off the elevator, let these people go home and have your moment for as long as you like?

I’m okay. My intense regime of climbing out of my window and hanging on by the ledge for twenty minutes every morning is finally paying off.

The main character suddenly falls, but manages to catch the ledge at the last second and is now dangling off the edge of the skyscraper, holding on by one arm with the busy city far down below him. Looks easy enough, but anyone who has ever done even one pull-up will know that holding your entire body weight by your arms is pretty difficult in reality and requires a whole lot of arm strength. Never mind just one arm while dangling off the edge of a thirty-six-storey building facing possible and most probable death.

I’m off to the concerto. you want me to pick up some milk on the way home?

Let’s wrap up with a quick talk about classical music, getting motivated and a strange new musical instrument made by a corporation I’m sure you’ve heard of.