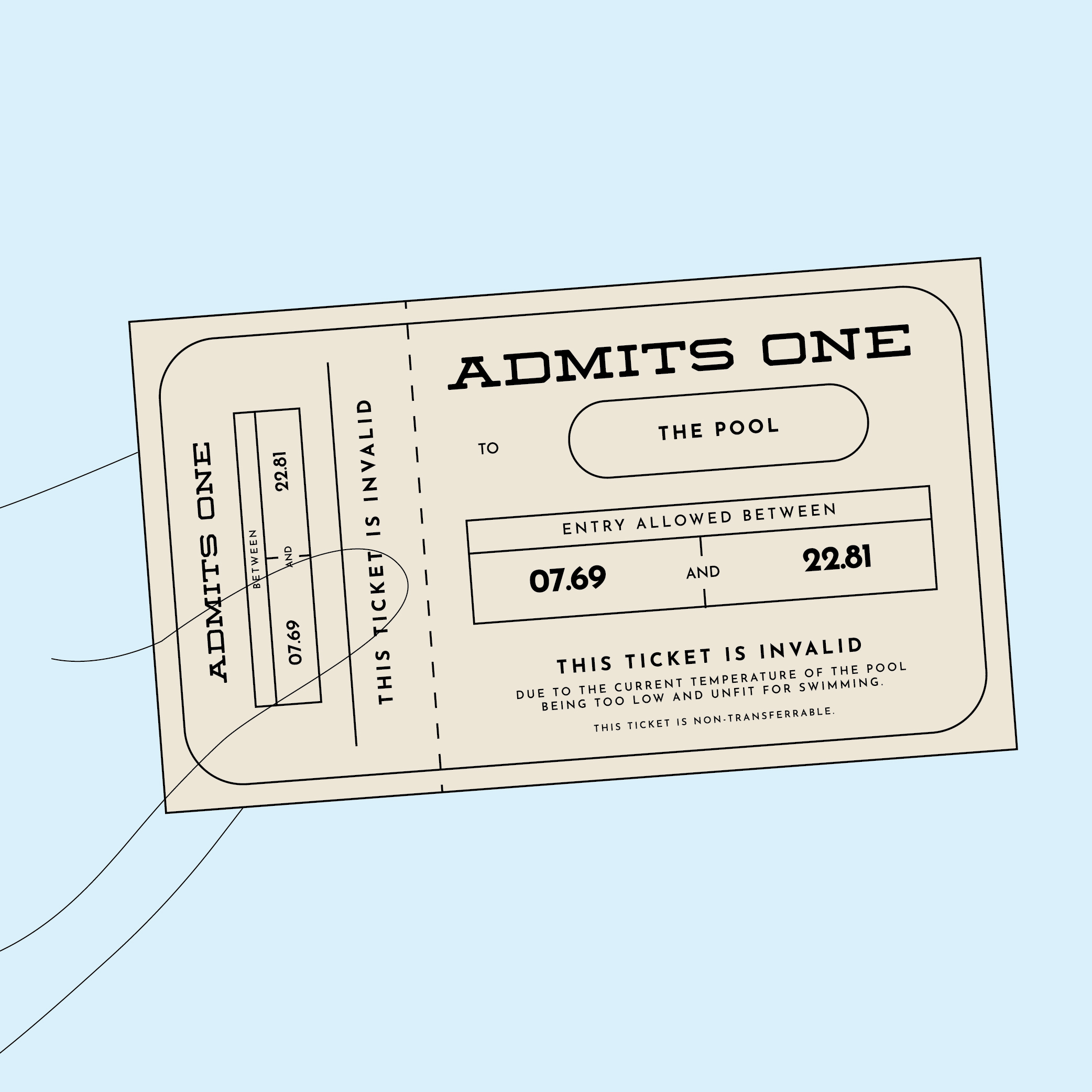 I went to Cairo in December 2015. And the “December” part matters because I assumed that a country like Egypt, with its deserts and palm trees, would be scorching hot all year round, even in December.

But it isn’t, really. The winters can be quite mild in Cairo, basically put-on-a-sweatshirt type weather.

The hotel we stayed in was quite empty, as tourism in Egypt at the time had kind of taken a decline in recent years, and we got to the hotel at night and checked into our rooms. The hotel was built in a kind of U-shape with the pool and lounge area in the middle — as is the layout with a lot of hotels and resorts. Shortly after arriving, I looked out of the window, saw that there was a pool, and made an immediate plan to hit that first thing tomorrow.

After breakfast the next morning1, I got ready with the whole kit: swimming shorts, goggles, towel. Went down to the lobby and headed past the reception towards the double doors that went out to the pool when suddenly I heard a voice.
‍
“My friend?”

It was the receptionist. He asked me where I was going. I told him I was going to the pool, although I thought it was clear from the towel around my neck, goggles strapped to my forehead and swimming shorts with a floral pattern that looked like the sky in Spongebob Squarepants where I was going. I figured he was probably just being friendly or making conversation.
‍
“Oh,” he said, changing tone. “The pool is very cold.”
‍
This kind of surprised me. “What do you mean?” I asked.
‍
“It is very cold outside. The pool is cold.”
‍
“How cold is it?”
‍
Just then, a man walked by who you could tell just by looking at was a swimming-pool-lifeguard guy of some sorts. You know, he was mildly overweight, wearing a polo shirt and had a whistle around his neck. The receptionist called him over and the two of them began conversing in Arabic as I glanced outside. The sun seemed to be shining, and the sky was clear. Where I come from, they call that “good weather”. How cold could it be?
‍
The receptionist turned back to me.

“Twelve degrees,” he said after conferring with the swimming-pool-lifeguard type. “The water, twelve degrees.”
‍
I immediately felt relieved. Twelve degrees? Pshht. That’s nothing. In London, twelve degrees Celsius is considered normal. Twelve degrees is probably cold in Cairo, but I’m from a different kind of place where seven out of twelve months is basically jacket-wearing weather. I’ll be fine, I thought. I’m used to it. “I think I’ll be fine,” I said. “I’m used to it,” as I exited the double doors with the receptionist and the pool guy both making the alright-but-don’t-say-we-didn’t-tell-you-so face.
‍
As soon as I went outside, I suddenly felt the chilly air. It was a little colder than I expected.

‍It’s no big deal, I thought. I put my towel down onto one of the many empty deck chairs and looked out over the perfectly still, gleaming water that was begging to be cannonballed into.
‍
Now, at this point, you can probably tell that I’m a little bit of a risk-taker. Maybe to a fault. But even someone who lives life more on the edge would — after being given a warning by two men who work at the hotel about the pool being too cold to swim in — at least crouch down and put, you know, a hand or at the least a finger into the water to check the temperature of the water before getting in. But no. That’s not what I did.
‍
I just dived straight in. With all the confidence in the world. And I paid for it immediately.
‍
The water was freezing cold. Turns out twelve degrees actually feels quite painful when you’re in a pool with basically only shorts on. I’m not sure of the science here of why twelve degrees in the air seems fine but twelve degrees in the water feels as cold as ice, but all I can say is that it felt like I had just jumped into some Norwegian fjord from some tourism advertisement that had been filled with liquid nitrogen. It felt like there were a thousand needles piercing my skin as I kicked hard to the surface and rushed to the edge of the pool to pull myself out. I sat there shivering while I heard laughter behind me. It wasn’t the receptionist, nor the pool guy. It was my brother, who had quite smartly sat out the morning swim and decided to stay in the room and watch me from the balcony. His cackling laughter echoed across the deserted hotel as I rubbed my arms to get warm. Then, around ten minutes later, I went for another swim.
‍
Not sure what the point of that story is. Maybe it’s got the same moral as that old quote: “If at first you don’t succeed, try, try again.” Because the second time I got back in that pool, I was prepared for how cold the water really was and I was able to keep swimming for a whole minute before feeling like it was getting too cold and feeling like I had to come out again. Had I gone for a third swim, I might have even been able to do a couple of minutes. Then the next time, five minutes and so on (until I’d probably have ended up with either a new world record of some sort or hypothermia or both). So, just maybe, what we can learn from my idiotic shenanigans in some swimming pool in Egypt is that sometimes you don’t succeed first time. Some things need more than one try.
‍
Or here’s another (better) story I heard once that basically has the same moral but articulated in a much better way.

A man is at the zoo and goes to see the elephants. He arrives at the enclosure to see something mind-blowing: the elephants, enormous and graceful as elephants are 2, were each attached by one leg to a post by a rope. A rope that was so skinny and fragile-looking, that the elephants could very easily break and go free. So the man sees this and calls over the zookeeper. He asks the zookeeper why the elephants don’t just break out, when they could incredibly effortlessly, given their size and strength versus the string-like nature of the rope.

And it’s here that the zookeeper explains. The zookeeper tells the man that the elephants are tied with these ropes since they are babies. And the rope is strong enough to hold a baby elephant, so when they grow up they still have that belief: that they aren’t strong enough to break through the rope, even though they already are.
‍
‍At some point in their lives, they give up trying to break the rope and just let it hold them, even though they are a mighty elephant that could not only destroy that tiny rope, but also pretty much any wooden fence that is holding them back and escape into the sunset.
‍
Anyone else get a warm feeling after reading that? Wasn’t that inspiring and wholesome? Eh, maybe not. But if you do like those kinds of metaphors, just know that the rope represents the obstacles in your life, dear reader. Go out and destroy them. But right after you finish reading this issue of Kanis Majoris. We have a great issue for you this time, with our informative, interesting and fun (despite the title of this segment) content. So stick around.

1 They always say that you shouldn’t go swimming right after eating — but how much truth is there to that? I guess it’s something to do with stomach cramps, but to be quite honest, what exactly are stomach cramps? Like a leg cramp when one of your leg muscles spasms out and feels like it’s been tied into knots? Is that what happens to your stomach if you swim after eating? Because that does sound horrific, not gonna lie.

2 In Thailand, National Elephant Day is celebrated on March 13th. Because who else other than the Thais would have a day dedicated to elephants?

THIS BEAUTIFUL NATURAL PHENOMENON WAS FILMED BEFORE A LIVE STUDIO AUDIENCE.

We’ve all heard of the northern lights. But what are they and why do they exist?