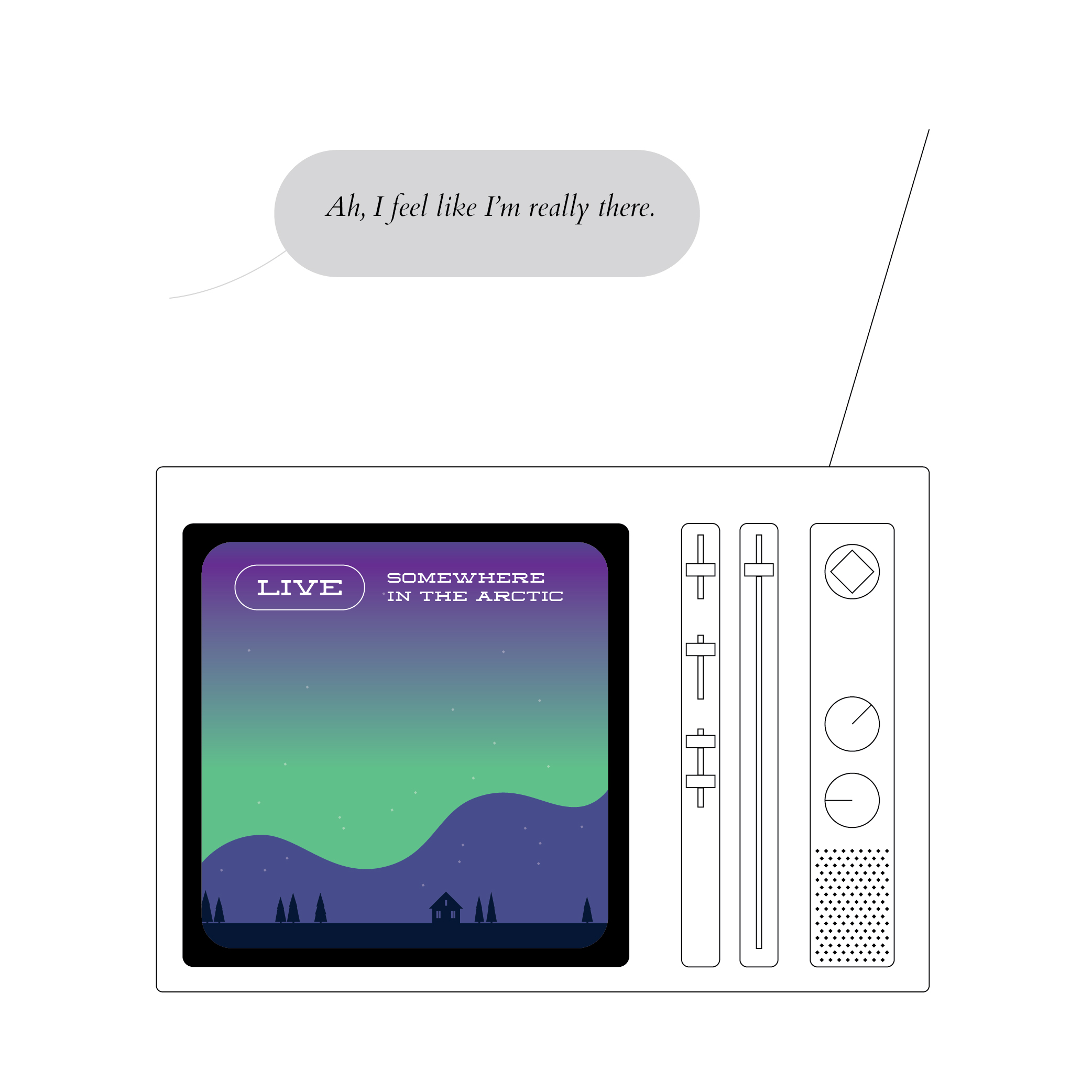 THIS BEAUTIFUL NATURAL PHENOMENON WAS FILMED BEFORE A LIVE STUDIO AUDIENCE.

The aurora happens because solar wind is attracted to the magnetic-ness of the Earth. That’s the basic gist of it, but what does that mean, exactly?

First of all: what is solar wind? Like, wind from the sun? What is that?

It’s not actually actual wind, per say. They just call it that for some reason. What it actually is, is plasma.

So do you remember back in science class at school when you learned about the “three states of matter”? The three states in which all matter is in? Do you remember what they are? Say it with me, now: solid, liquid and gas.

Great. But it turns out that there are actually more than three states of matter.

The fourth is this thing called plasma1 that we mentioned earlier. Now what exactly is plasma? I don’t know exactly. But let’s just say that it’s something that’s not a solid, a liquid or a gas. It’s something other than that. That I don’t know how to explain. Hey, I failed high school chemistry. What else do you want from me?

So when this plasma from the Sun approaches the Earth, it gets affected by the magnetic poles — which is why the lights can (mostly2) only be seen near the North and South Poles — and becomes this light show in the sky that glows like some bioluminescent jellyfish dancing around in front of a group of freezing tourists.

However, when people go to see the aurora, they usually go to the North Pole. It isn’t because the aurora at the north is better than that at the south, like some sort of premium subscription versus some free trial, it’s more about what the landscape is like at the poles. At the north pole, there is a lot of land whereas the south pole has a lot of sea. So when people go to a town or a city where the northern lights can be seen — usually it’s Canada, Iceland, Norway or Finland, although the lights can actually be seen from a number of other places, including the Faroe Islands3 slightly north of the UK — it’s usually a place that’s on land which makes it easier to see the aurora.

Another reason is probably because most of the world’s population lives in the northern hemisphere, so it would make more sense to go to the Arctic region.

Also, for the southern lights, you’d most likely have to be on a boat in the middle of the sea, and that doesn’t really sound like fun for a lot of people. You could, of course, go and see the lights in Antarctica4 but let’s not even open the can of worms of how cold it would be in Antarctica. Yes, you can actually go to Antarctica for tourism. Although it isn’t a part of any official country5, there are tours that take people to the largest desert in the world6. You can’t, however, just go to Antarctica directly. You first have to go to a country near Antarctica, like Chile or Argentina, and then from there you continue either by sea or by air.

Okay, so I know I said I’m terrible with chemistry, but here is another science question: how cold can it possibly get? It’s interesting because in the Celsius7 scale, where 0 is the temperature where water freezes and 100 is where water boils, the coldest temperature possible is -273 degrees. It can’t get any colder than that.

This is the highest known temperature and it is so mind-blowingly hot that things actually begin to get a little weird and abstract at this level. Not only that, but we (meaning scientists) honestly don’t know what would actually happen if we went any higher than that. Now, don’t ask me why it’s like that. That’s where my knowledge ends and tapers off into a dark abyss of the unknown.

2 I say “mostly” because there have been records of the aurora being seen as far south as Egypt. Speaking of which, the land of the pyramids and tasty shish kebabs is such a fascinating place and you can read more about it here.

1 So there is actually a fifth state of matter, too: Bose-Einstein. I’m not even going to try to explain what that is because I’m already in over my head here with the science. But what I do know is that it has something to do with Albert Einstein as well as another guy called Satyendra Nath Bose. But it doesn’t have anything to do with that company that sells headphones and home audio systems.

2 I say “mostly” because there have been records of the aurora being seen as far south as Egypt. Speaking of which, the land of the pyramids and tasty shish kebabs is such a fascinating place and you can read more about it here.

3 A group of islands about 200 miles (322 km) north of the coast of Scotland that are actually owned by the Kingdom of Denmark. It might also be surprising to hear that Greenland, that icy country next to Canada, also belongs to Denmark. Iceland also used to be in that group, but they broke away and got independence in 1944.

4 If you do go to the southern hemisphere to see the lights, it wouldn’t be the aurora borealis anymore; it would be the aurora australis. But you already knew that, right? Australis, by the way, comes from auster, meaning “south” in Latin. Which is also where the nation of Australia gets its name. Another (kind of related) interesting thing are the Latin words for “middle” and “Earth”: medium and terra (respectively). So, put these two words together and we get? That’s correct. Mediterranean. As in the Mediterranean Sea. And it roughly means “in the middle of the land”.

5 According to the Antarctic Treaty that was signed in 1959, Antarctica is part of what’s called the Common Heritage of Mankind, which basically means that it belongs to no one and also everyone. No country can invade or claim Antarctica as their own, but anyone is free to go there and explore it as a part of the natural world. The same goes for space. No one can claim the Moon as their own, for instance. Even though it might be confusing because the US literally went up there and planted a flag, but that was probably more for like showing off purposes or whatever.

6 Remember, from Kanis 3 when we talked about deserts and I told that story about the two guys getting lost in the desert in Australia? God, doesn’t that seem like forever ago?

7 Is it Celsius or Centigrade? They’re really the same thing. Which I actually didn’t know. Did you?

8 One of the most awesome YouTube channels of all time. More on that later.

keep the engine running, i’ll be in and out.

Thinking of putting on a clown mask, picking up a duffle bag and charging into that bank just to see how far you get before you start hearing sirens? Let me give you some advice: don’t.