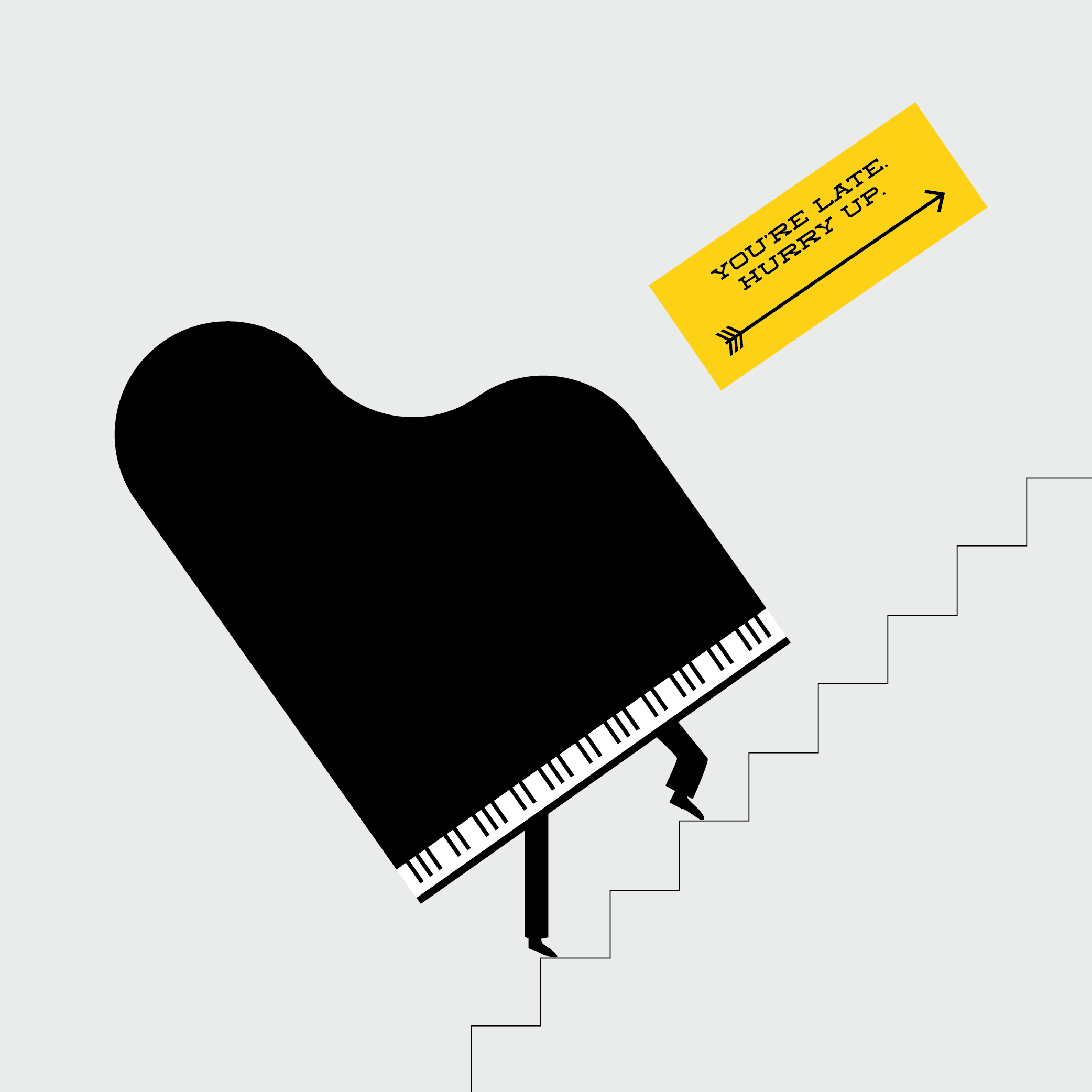 I’m off to the concerto. you want me to pick up some milk on the way home?

Here’s something strange about me. I love watching drum videos; drum covers, live performances, anything where the drums are being played — preferably fast and loud. And I don’t even play the drums. I’ve barely ever touched a drum set, but I just love watching the energy of the drums being played — like Nyango Star1. I don’t know why but I get a sudden burst of motivation when I watch something with that kind of energy.
‍
It’s the same for me with orchestra videos. I often go on YouTube and find videos of like some random Philharmonic Orchestra performing some epic symphony with great enthusiasm. I guess I love the synchronised energy — or synergy, I guess? — of all the violin bows moving with the same precise movements and the conductor standing at the front waving some stick around like a wizard2.

Classical music is old. But all the classical composers you hear about aren’t all the same amount of “old”. Like it’s easy to think that Mozart, Beethoven, Chopin, Vivaldi and all these guys were from the same time period and were all buddies that would hang out and jam out together on the harpsichord. But that’s not exactly true. There are actually different periods of classical music; for example: Vivaldi and Chopin were actually around 200 years apart from each other3.

It’s basically divided into six time periods: Renaissance, Baroque, Classical, Romantic, 20th Century and then Modern. So guys like Vivaldi (Four Seasons) and Bach (Orchestral Suite No. 3 in D Major, BWV 1068: II. Air — trust me, you’ve heard it before, just search it on YouTube) were way back in the Baroque period, then the legends known as Mozart (I’m sure you’ve heard Turkish March) and Beethoven (the guy that went deaf) came next in the Classical period, before the next wave that brought Brahms (maybe you know Hungarian Dance?), Tchaikovsky (the man behind Swan Lake — yep, the one from Black Swan) and Debussy (just listen to Claire de lune) in the Romantic period. But all these guys are from a long time ago — from our point of view, anyway.

So why do orchestras have so many instruments? It’s always like thirty violins and a few trumpets and then some guy in the back with a big bass drum. The reason why is because the music that they’re playing is — most of the time — so old. In the days before electricity and smartphones and Dyson’s bladeless fans4, you had to have a lot of violins all playing at the same time so the audience could hear.

Nowadays, however, you can just take one violin and use technology to make it as loud as you want. But the point is that they’re basically trying to accurately replicate the same kind of sound that the music had back when it was written. And with instruments like the violin, the more you have, the richer the sound.

So next time you’re sitting in the audience at the concerto, just remember that we are incredibly lucky to have all this technology around us that makes miracles happen. Or what would be considered to be a miracle just a couple of centuries ago. Especially with listening to music. I mean, when you think about it, these days we can listen to our favourite songs basically whenever we want thanks to YouTube and Spotify and overhearing music being played in a clothing store5, but back in the day — and I’m talking not even that long ago — you had to buy a cassette or a vinyl record and play it when you got home. And before that, you could only listen to music on the radio. And before that, you could only hear your favourite song if you went to a concert. Like you had to have an evening out just to listen to music — I mean there were probably random people playing music on the streets — but you had to dress up, put on a tux and go sit in an audience with other people just so you could hear the music you liked.

So you probably only heard your favourite song like… a few times in your whole life? Maybe a little more? And imagine the feeling you must have gotten by hearing your favourite song one out of the six times that you were ever going to hear it. People must have been getting that chill down their spines6 every time they went to a concert back then.

So here’s my question: are we better off than those people? I mean now, we go through reams of content every day. Often with music, I like a song, I listen to it, I listen to it again, and again, and again, over and over until I get so tired of it I have to boycott that song for at least six weeks before I can bear to hear it again. But the people back then? They would hear their favourite songs so few times that whenever they did, it was probably a beautiful, euphoric moment for them. Quality does beat quantity I guess. I don’t know. Am I boring you? I feel like I’m boring you.

Another way to listen to music, of course, is to play it yourself. But that can be tough. Like with most things in life, you need to practise. A lot. It takes a lot of dedication and determination — like in the movie Whiplash, which I’ve mentioned before.

I didn’t really realise how much dedication these things take until I started with the guitar a number of years ago. I picked it up in the same way that most people do; listening to John Mayer a bunch of times and thinking it was easy business just strumming along and playing a song. And it was easy — at first.

They call this the “plateau of learning” where at the beginning you make quick progress as you learn more and more each day. But, as time goes on, you begin to level off and you don’t learn as much each day any more — even though you are putting in the same amount of time and effort daily. I found, from my personal experience with the guitar, for instance, that in the first few months, it was so much fun. Every day, I was picking up new chords, learning new riffs that were easy and simple and my confidence grew more and more each day. Then, after around three months of daily practice, things began to slow down. I started getting more into chords that were not as simple and fingerpicking techniques that took a lot longer to master. It wasn’t easy, as I had expected, but it actually led me to abandoning the guitar a short while later. Why? Because this is the part of the journey that takes the most amount of effort. My favourite book of all time, The Alchemist, sums this up brilliantly: “Every search begins with beginner’s luck. And every search ends with the victor’s being severely tested.”

What I take away from this quote is that in the beginning, things will seem easy for anyone who wants to start. But it’s only those who keep going past the point of where things start to get difficult — the “plateau” — are the ones who end up succeeding. And this applies for basically anything you want to learn: how to play the venova7, how to speak Indonesian8 or even juggling plates9.

That’s it for this issue of Kanis Majoris. Like always, thank you for reading, etc, etc. And if you have enjoyed this issue, be sure to fill out our feedback form that you will be receiving by email at some point after you finish reading this issue! Just kidding, no email spam. But you are more than welcome to send me some.

1 You must be familiar with this video. It’s been published on YouTube in many different variations with different titles, but the one that I first saw was called “When you’re overqualified for the job”. It basically has a figure who wears a costume that honestly makes him look like a friendly character from some kids’ show, and he is shown to play the drums. He plays nice and slow at first, but then after a few moments he emerges into this rampage of heavy, metal-style drumming that looks totally inappropriate and out of place for the costume that Nyango Star is wearing. Upon further research, I found out that Nyango Star actually is a type of mascot very common in Japan known as yuru-chara. These mascots can represent a company, a business, or — like in the case of Nyango Star – a place. Nyango serves as the mascot for the Aomori Prefecture in Japan, a region well-known for its delicious apples. Which explains why Nyango Star’s costume is actually an apple. This all makes sense if you watch the video.
‍
2 Although they don’t always need to wave that magic wand. A lot of conductors just use their hands.
‍
3 Kind of like with dinosaurs. Like you know how it seems like dinosaurs all existed together at the same time when in actual fact the stegosaurus was extinct millions and millions of years before the tyrannosaurus rex came around.

4 I don’t know what it is about these fans (they’re called the Air Multiplier) but ever since they were introduced by Dyson in 2009, I’ve just loved them so much. They look so cool and they are a fantastic idea. Even though the technology was first invented by Toshiba in the ‘80s, I know.
‍
5 Why do they actually have music in stores? I’ve never really understood. Is it really just to keep the customers entertained? Just seems a little unnecessary in my opinion.

6 It’s called an eargasm. But you probably already knew that.

7 A new instrument invented by Yamaha — that company that makes both pianos and motorcycles. It looks kind of like a mix between a recorder and one of those locks you strap onto your steering wheel at night.

9 See the illustration of a juggler climbing up steps with broken plates by Stephan Schmitz; it fantastically depicts the struggle to success. Just search the artist’s name and you should be able to find it.

THAT IS THE END OF KANIS MAJORIS NO. 4.

IN THE MEAN TIME, YOU CAN READ SOME OF KANIS MAJORIS’ PREVIOUS ISSUES BY CLICKING HERE.
OR JUST KEEP SCROLLING TO SEE THE ACKNOWLEDGEMENTS FOR THIS ISSUE.

Kanis Majoris is a magazine by Hamza Javaid (@arkadinarium).
‍
If you would like to contact the magazine for anything, please email: kanismajorismag@gmail.com.
‍
If you prefer Instagram: @kanismajorismag

Kanis Majoris No. 4 was released in May 2022 with thanks to:

Copyrighted by Kanis Majoris Ltd © 2022. Sorry I have to get all legal on you here, but it’s important for you to know that this online publication cannot be copied or reproduced whether in whole or in part without prior permission. I mean, I know we just met and everything but let’s not get ahead of ourselves.