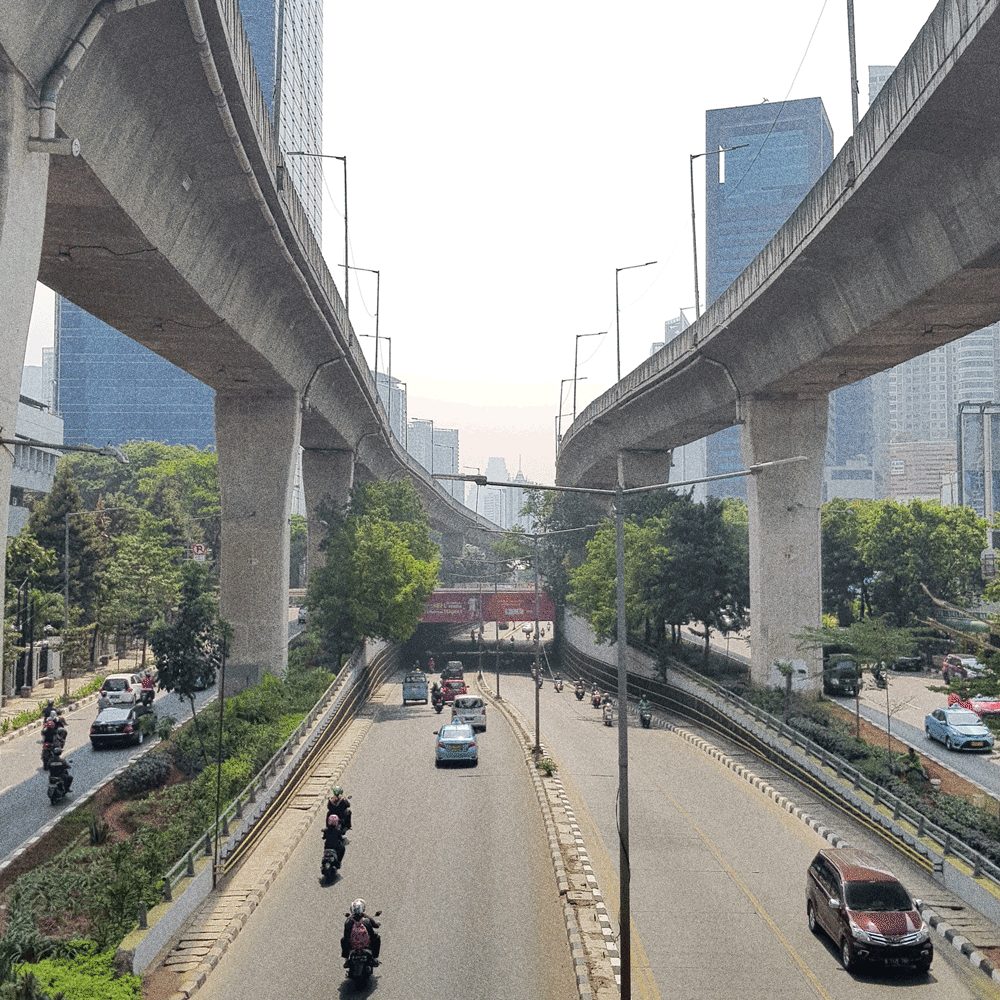 DRIVING AROUND THE CITY AT NIGHT WITH THE WINDOWS UP. YOU KNOW, IN CASE OF KOMODOS.

I have lived in cities my whole life. Born and raised in London, UK and having visited numerous cities around the world, metropolises (is that the correct plural for metropolis?) are where I feel comfortable. I have, therefore, quickly grown accustomed to the busyness of Jakarta.

You fully understand the term “concrete jungle” when you live in, or even visit, Jakarta — in both terms; you see the “concrete” and you experience the “jungle”. The smoggy, grey city is populated with concrete; roads, bridges, flyovers, thick pillars to hold up the flyovers, buildings, overhead train systems, underground train systems, stairs and pavements — where present. You also see the jungle-like nature of the traffic; the green-helmeted scooter riders zig-zagging through the gaps in between the cars; the rusty-blue coloured angkots spontaneously appearing before driving off, zooming illegally down the bus lane; the multitude of cars all painted in a hue of black, white or something in between; the street sellers sitting by the side of the street next to their carts on plastic stools, selling steaming rice, noodles, soup, fresh fruit or the starlings peddling instant coffee, tea, juice or water off the back of a bicycle. You also witness the contrast that the city offers. From the tidy streets lined with mansions and greenery in Menteng to the shacks that stand overlooking the Ciliwung river. From the full eight-lane carriageways lined with tall buildings to skinny kampung alleys barely wide enough to allow a scooter to pass through.

Although it is the national animal of Indonesia, there are no komodos roaming the streets of Jakarta1. The jungle-like nature of the city has been created by us humans, what with our rushing around and trying to get to wherever we’re going as soon as possible. It’s the same everywhere, I think. Most of the other cities I have either visited or lived in — London, Paris, New York, Lahore, Cairo — all have had the problem of jungle-like traffic. Most people are reluctant to believe that London also has traffic problems, but it’s true. There have been times in London where I’ve travelled less than a kilometre in 45 minutes.

When being so far from your home, you notice how different everything is. Everything is different in Jakarta than in London (except maybe the traffic, although it’s not as arduous in London). Everything, from the obvious things like the people, food and language, to the smaller, more basic things. The thickness of the air is different. The taste of the water is different. You even see colours differently. The sun is higher in the sky, and the sunshine is more vigorous. The moon is tilted at a different angle in Indonesia than in Europe. The trees, plants, insects and soil all seem strange and new. The smells of the city and the level of humidity are all to me a part of Jakarta’s identity. The warm rain. The booming thunderstorms. The fact that it’s even hot at night. That blanket of smog smothering the city that you only see once you go higher than ten storeys. The backdrop of blaring car horns and piercing whistles from the street-standing traffic conductors. The howling echoes of the azaan from the mosques.

I first visited Jakarta in 2018. I stepped out of Soekarno-Hatta Airport and into what felt like a sauna at the time. Little did I know that I’d be moving to this very city only a year later. Moving to a new city on the other side of the world is a very educational experience — not only will you learn about a different culture and pick up a new language, but you’ll also learn about what is considered “normal” for other people, the values that other cultures have, and you may even learn a thing or two about yourself.

The best movies of the previous decade. In my opinion.