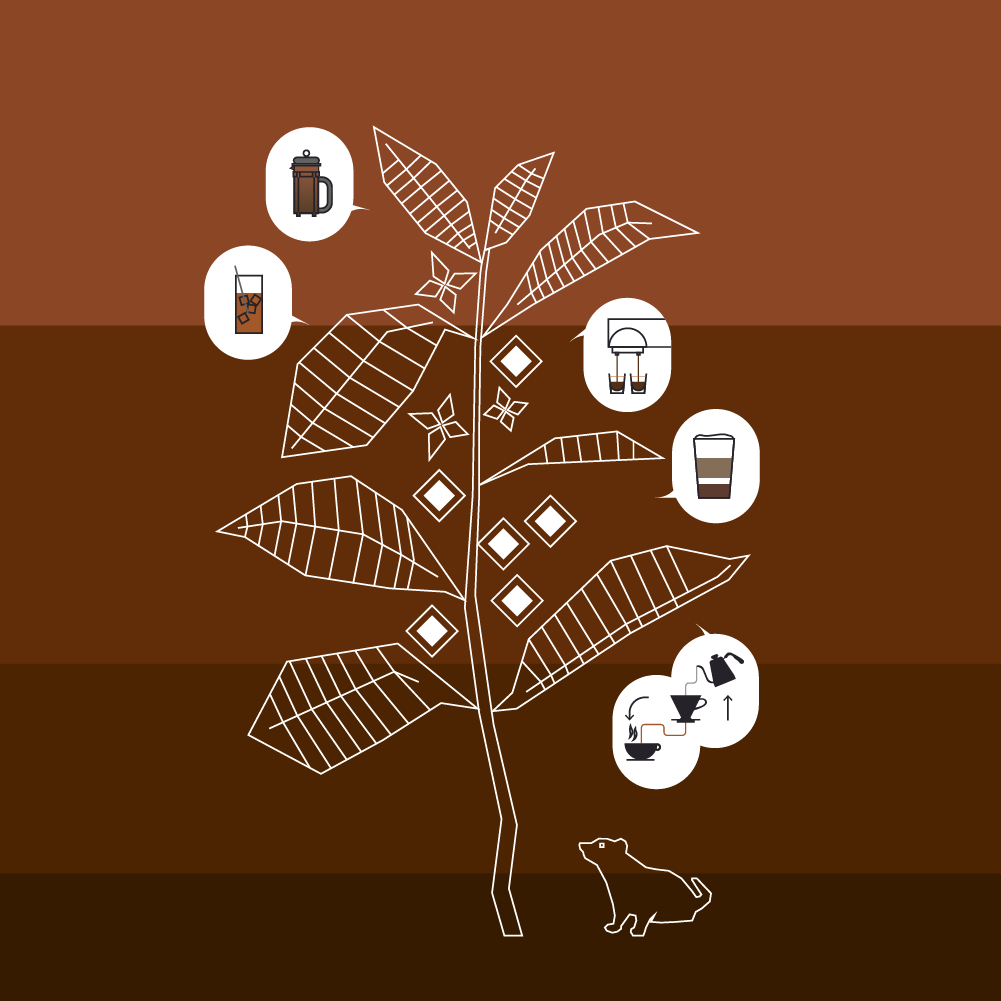 I’LL HAVE A DUO SKINNY HAZELNUT MACCHIATISSIMO. NO WHIPPED CREAM.

Coffee, as you may know, comes from a plant. This plant grows and bears a fruit which is harvested and then processed1. The seed of this fruit basically becomes a coffee bean after all that processing. Now, if you take this coffee bean, roast it and then grind it to make small granules, you will have coffee with which you have two choices: run water through it to make brewed coffee, or combine water and pressure to make espresso. These are the two options, and they are the base of all coffee types. Macchiato, cappuccino, mochaccino, latte, americano, affogato, espressino, cortado… the list goes on. None of those is made up, by the way. Not even espressino2. In English, the word coffee came from the Dutch koffie, which came from the Ottoman Turkish kahve, which came from the Arabic qahwa.

Coffee is consumed all around the world in many different forms. A lot of the modern-day drink names — cappuccino, espresso, latte — originate from Italian, probably because Italy was one of the first (if not the first) places in Europe to import coffee back in the 16th century. Or maybe also because espresso was invented in Italy. Mochaccino, however, — also known as a mocha — actually gets its name from the city of Mocha, Yemen which was a hub for coffee trade from the 15th to 18th centuries.

Alright, enough with the history lesson. Let’s make some coffee. But first, we’ll need some. A quick trip to the supermarket — or local artisanal coffee roastery, if that’s your style. Or just take a look online — and you’ll see coffee usually being sold either as ground or as whole beans. And there will be all sorts of countries of origin; Colombia, Ethiopia, Brazil ...but which one to get? And why does coffee only come from hot, tropical places? You can probably guess why. The coffee plant only grows in certain climates, mainly countries with lots of rain and mild temperatures. Take a look at a world map and find the latitude line known as the Tropic of Cancer (it should cut through Mexico, northern Africa, the Middle East and India). Then find the Tropic of Capricorn (Australia, southern Africa and the middle of South America). Coffee generally grows in between these two lines, in an area known as the coffee belt.

There are some coffees that are better than others. Or considered better, anyway. Kopi luwak is a type of coffee originating in Indonesia that is one of the most expensive types of coffee in the world, and it is a very special type of coffee indeed. So what is it? Well, deep in the forests of Indonesia, there is an animal that the locals call a luwak. In English, it’s called an Asian palm civet — but think of it as kind of a mix between a cat and a racoon. It’s a small animal that eats the coffee fruit (that we mentioned earlier) and then later — when it’s digested — the seed of the coffee fruit (i.e. the raw bean), after being influenced by the civet’s natural digestive process, comes out in its business. If you reach in and take that bean that has been through the civet’s body and make coffee out of it, for some magical reason, the coffee will taste absolutely amazing if compared to a regular, un-digested-by-an-Asian-palm-civet bean. It’s evidently so amazing, in fact, that kopi luwak sells for about $20 per 50g internationally3 and an entire industry has been built around this miraculous recipe given to us by nature4.

After buying your coffee — remember, we’re still at the supermarket/local coffee roastery/online store — you can bring it home and make it how you like. Remember, the two main types are either brewed or made as espresso. For a brew, it’s simple. You just need to basically pass water through the coffee, kind of like how you would with tea, and then filter it. There are various methods of brewing; French press, Chemex, V60 or you could just do it Indonesian style5 and not filter it at all. And then we have espresso which is made by adding pressure, for which you would need a machine of some sort — although you can get yourself a “hand-operated, manual, portable” espresso maker which will make espresso, however, whether or not it has the same result as a machine is up to you to decide.

1 So what exactly does “processed” mean? Coffee beans are processed in a variety of ways depending on the location and resources. Generally, the fruits are either dried in the sun or dried with a machine of some sorts before having the seed extracted. Other methods include removing the fruit with water first and then drying the seed. After drying, there are a variety of other milling processes such as hulling and polishing which essentially strip the seed down to its inner parts, which is precisely what we need for our caffeine fix.

2 An espressino is one part espresso, one part milk and some cocoa powder.

3 International prices can be different from local prices. Here in Indonesia, kopi luwak can be acquired for a cheaper price than abroad. Obviously, prices change so the numbers aren’t for sure.

4 Personally, I have not tried kopi luwak and I don’t intend to. There have been reports about luwaks being abducted, kept in small cages and force-fed coffee fruits to produce maximum amounts of kopi luwak. I just don’t think that’s nice. Also, I prefer to have my coffee poop-free, I’m just saying.

5 Indonesians have a drink called kopi tubruk, in which coffee grounds are simply boiled with sugar and served without filtering.

Same as before, but this time it’s double trouble. That’s right — not one false fact but two. Which ones are real and which ones are “fake news”?